I'm having a bit of a poo morning, I've got a low-level nervously sad feeling bacause a painting is missing in the post - this has never happened before and it's absolutely horrible!
I use Royal Mail a lot for smaller paintings, this one went via their Special Delivery service which I thought was safe as houses - apparently not. The real kick is that the parcel has tracking details and should be scanned through the network but the tracking has ceased (two days ago) and customer services basically gave me a gentle shrug of the shoulders over the phone and a "you can put in a claim after 5 days". So they won't even phone/email the last depot it was supposed to be at and have someone chase it up. I know, I've seen inside those places on the TV, it's not that simple, the damn thing's probably been torn to shreds in one of the sorting machines or similar.
What is the point of tracking if they won't do anything with it?

Edited to add: I've been chatting with Royal Mail's customer service people on Twitter which, while slow (they're obviously dealing with a LOT of people), has been a lot more helpful that the customer services that you ring up. I feel as though they're actually trying to help (might be smoke and mirrors but they come across as though they do care!), I'll update with whether the parcel turns up when I know.

**Edited again to add that the Twitter folk really sorted things out, they put in a formal complaint, the parcel re-appeared on the tracking system and it was safely delivered on Saturday!

I always get the horrible Postman Pat theme tune (modern Pat) in my head when I utter the words 'Special Delivery Service', along with all the chaotic images associated with the modern day Pat, driving around Greendale and Pencaster in the pointless vehicles which have obviously been requested by a boardroom of people who wanted to have as many toy tie-ins as possible. Pat should, ideally, be transferred to a different area of work, because delivering is not his strong point.

I remember being pleased that they'd re-issued the original series of Postman Pat. It's got a lovely pace to it, you get a sense of how communities like the one in Greendale would have relied on the local Post Office and how well they may have known their local postie. To be fair, I think most people are still familiar with their local postie!
Our house used to be well known at the local sorting office because we had a house-rabbit who would lie by the front door while we were at work and when the post was delivered she would pull it through as the postman posted it. For maximum effect we had floor to celing glass in the window next to the front door and little Pie would be sat there eating whichever piece of post she liked the taste of best. 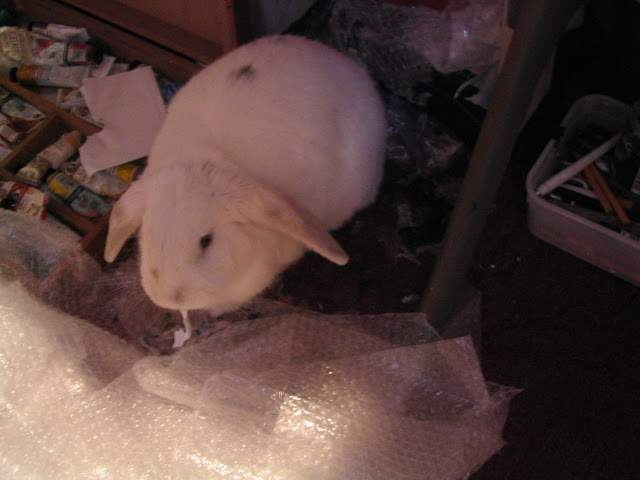 Here she is in the studio eating some paper.
Labels: posting paintings