I only ever seem to go anywhere if I absolutely have to do so. I'm very much the type of person who will avoid leaving the house as much as possible.
Today Ol and I had to deliver some paintings to the Potteries Museum and Art Gallery which I have never been to before (despite really enjoying museums and local history). First impressions of this area of Hanley were a big 'wow!', the town planners have done a lovely job on this area, it's really beautiful to wander round. I was seriously impressed by the muesum's architecture - it's a whopping great building, I wasn't sure till I googled it but guessed it was built in the 1950s (it was opened in 1956). I've always liked 50s architecture, the architecture at ICI used to fascinate me too (I used to work there - it was Astra Zeneca by then though). There was a lot of wood used throughout the interiors, there were long dark corridors in the lab sections, these were lined with dark wooden cupboards which had sadly been painted with brighter gloss at a later date (presumably to brighten them a little!). I'm an advocate of holding on to and caring for architectural details like these wooden cupboards. The wood aspect ran through the whole building, the handrails were made of curved wood which matched the cupboards, the lab benches matched the cupboards too. They were in the process of converting the original labs to offices while I worked there but you could peep in and see the old spaces on one of the floors.
Imagine my delight at finding seldom used staircases in their original state and with a wonderful smell, the smell of history. I spent a lot of my 'filling coffee machines' time wandering about the site. Astra Zeneca were such an odd company to work for, they wasted so much money on piddly stuff like free tea and coffee, new machines for said tea and coffee, also print runs of (admittedly very interesting) booklets about the history of the site. That's pharmaceuticals for you, big money. There was so much site development, literally millions of pounds' worth of development and then they just moved all their R&D down South. 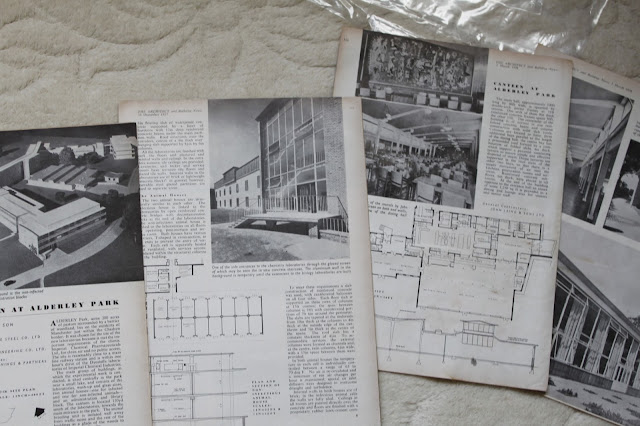 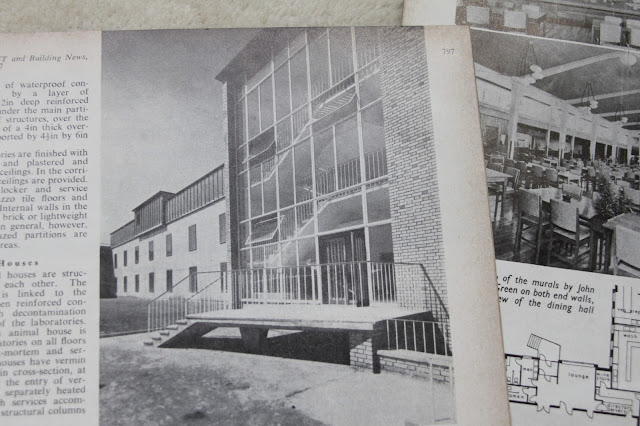 This is very similar to my staircase to nowhere ('nowhere' due to continued re-development and the changing use of the buildings).  I got these articles from ebay, they're fascinating. 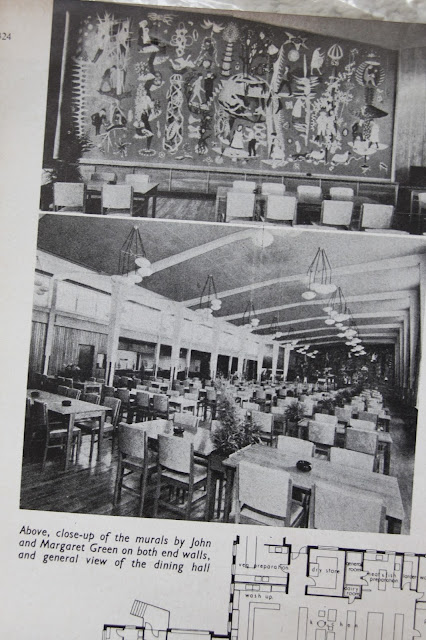 I can't tell you how disappointed I was to discover that they had flattened the original canteen!!! (above). The canteen on the other side of the site however, was not flattened and I got to work there for several years. It had been significantly altered but the bones of the building were there and there were other compensations to working on that side of the site also, namely the old workers' cottages and part of the old hall and a very beautiful old dovecote. One of the converted cottages had been decorated with shells by a previous tenant, just a couple of rows set into mortar either side of the door. I have a photo somewhere but can't find it.

Back to today's outing. We had to go round the back of the museum to drop off the work as they weren't open. This was interesting as it meant we went down a steep flight of stairs or two. Under the footbridge to the museum was a homeless chap and a fairly extensive amount of broken glass. Poor bloke, you'd think someone would pop round once a month to sweep up and keep the area a bit cleaner.
I was very pleased by our brief look inside the bowels of the building- there were original 1950s doors and woodwork (possibly the lino as well)!! Naturally I kept this all in my head because bursting into raptures at 'old wood' and original features is a little weird. Instead I did my usual socially awkward thing of being almost entirely unable to make light conversation.. I have got to work on that. A nice surprise was seeing Andy who I went to college with, the lucky devil works there.

Here is a very good round-up of the Museum from the Discover Stoke-on-Trent blog.